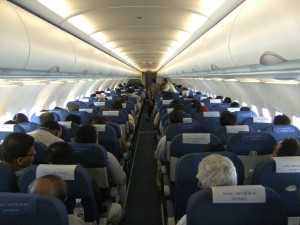 If you’re anything like me, and have spent a significant portion of your life travelling, then you would have drawn comparisons between the two modes of travelling very frequently! Now, I’m writing this while I’m on a plane, so please ignore if my post seems a bit too biased towards trains. You see, just the fact that I’ve apologized six times to go to the loo (feels for people who are big; you can’t even pee in peace) twice has me pretty riled up at the moment. Anyway, let’s delve right in.

1) More space – I think this one goes without saying. A train berth has so much more space than your regular economy class plane seat, and if god forbid you’re travelling by Indigo or Spice jet then rest assured your legs will be turned to jelly by the time you’ve landed. In contrast, the Shatabdi seats are so much bigger and more comfy. It looks and feels like a plane too, so one doesn’t really have to be on a plane to experience the flight.

2) I think space deserves another point – The best part about travelling on a train: you can actually sleep. Unlike a plane where you try your level best to squirm into a comfortable position so you can atleast manage to nap for a while, a train berth allows you to drift off to a peaceful sleep. IRCTC also provides fresh bedding, by the way.

3) You don’t have to pretend to be sophisticated – This is for all the desi-at-heart kinda people (like me) who can’t put up a sophisticated act just because you are travelling by plane. The in-your-face hospitality of the crew itself makes me uncomfortable. Hell, being addressed as ‘ma’am’ each time I ask for water makes me feel uncomfortable. It makes me feel obligated to behave in a proper manner too. It’s a psychological trap, I tell you. It’s a way to manipulate people into feeling guilty and consequently responsible to behave properly each time someone smiles at them and greets them with a practiced Namaste. On the other hand, on a train I feel free. I don’t have to behave well, especially when uncouth chaiwalas enter the train at each major station, yelling rhymes that I swear to god never leave your brain. The TT is almost always chewing paan and the family next to you is always chatting away loudly. So you see, the train is for junglee people. If you’re one, you would agree.

4) More quantity of food – Each time I see the air hostesses dragging out their food trolley, I get excited and rub my hands with glee. I start wondering about the delicacies that will soon be offered to me. But the moment I unpeel my tray I am left a strong sense of disappointment bubbling inside me. A piece of bread, butter, jam and assorted fruits that won’t satisfy even a squirrel’s appetite. This is utter nonsense. We pay out of the depth of our pockets to buy a plane ticket (along with high taxes) and all we get is peanuts as food. On the other hand, a Rajdhani Express offers a big thali that includes everything from daal to paneer to parantha to chaawal and also some mithai. Not to mention endless supplies of tea, coffee, coke and chips! 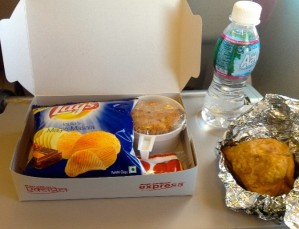 5) Real Indian Scenery – If you have ever travelled by the general or ‘sleeper’ class, you have experienced the real scenic beauty of India. The windows are not glass sealed. There are just vertical rods preventing you from jumping out of the train. But the view is breath-taking. You see everything from farms, lakes, houses, cities, villages (and villagers) pass you by. It’s liberating in a surreal way. The air you feel on your face is real. 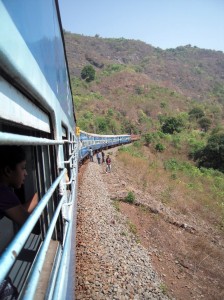 6) It’s more fun – This is almost an extension of point 3. A train ride offers so much more scope for fun if you’re travelling with friends and family. Almost every train trip that I’ve taken with friends has been memorable. We laugh, sing, dance and joke around freely. Not to forget, the evergreen pass time – cards! On the other hand, I travel by plane only when I’m travelling alone. Because it’s bound to be silent, sophisticated and boring.

7) The loos – Now I know that a lot of people have problems with the Indian Railways’ bathrooms, and justifiably so, but personally they have never been such a huge issue for me. Probably because in my lifespan I’ve seen the worst possible loos in the Indian railways, so now a partially bearable 3 AC compartment loo is like heaven for me. But the reason I’m mentioning this point is because of size. Like I said in my introduction, the plane bathroom ‘lavatory’ is so small that a bigger person will probably find it easier to hold it in rather than struggle on with squeezing inside that small coffin. It looks and seems so fragile that it seems like everything will break on touch. It’s suffocating.

8) All this, and cheaper! – While a plane ticket costs nothing less than 5-8K on an average, a train ticket can easily be purchased between 300-1K (even in tatkal) and this, folks, is the reason you don’t feel disgruntled even when the train is late, because the ticket hasn’t burned a hole in your pocket.